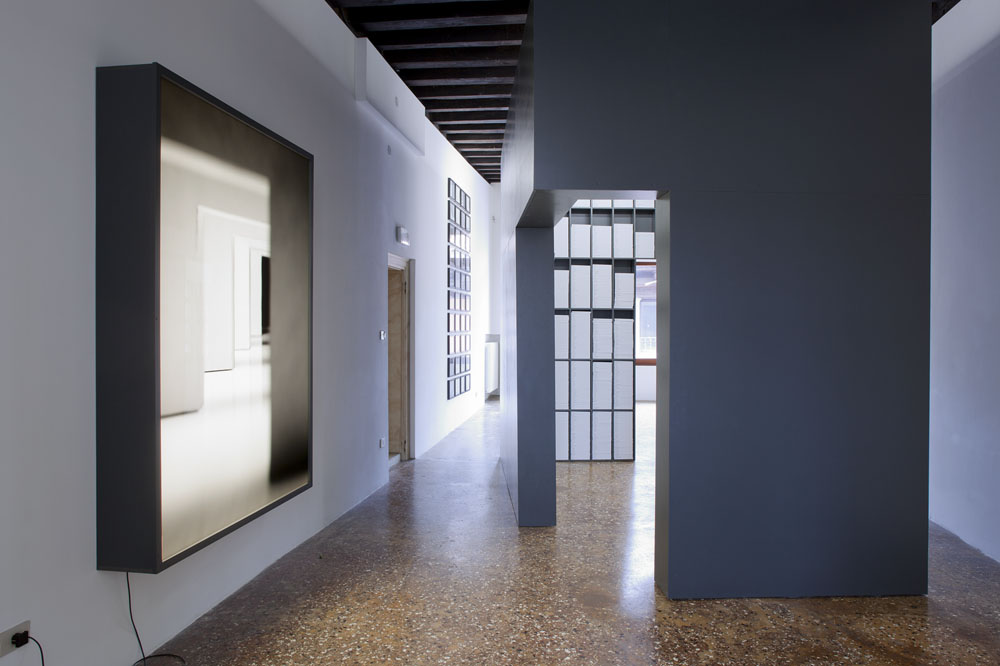 Estonian artist Dénes Farkas, born in Budapest in 1974, represents his country at this year’s 55th Venice Biennial with the work “Evident in Advance”. “An engaging way of failing”, he described the pavilion’s concept as we discussed it in Tallinn. Located in the historic Palazzo Malipiero facing Piazza San Samuele in the city’s San Marco area, Farkas’ minimalist installation evokes a multitude of questions, just to the artist’s liking. 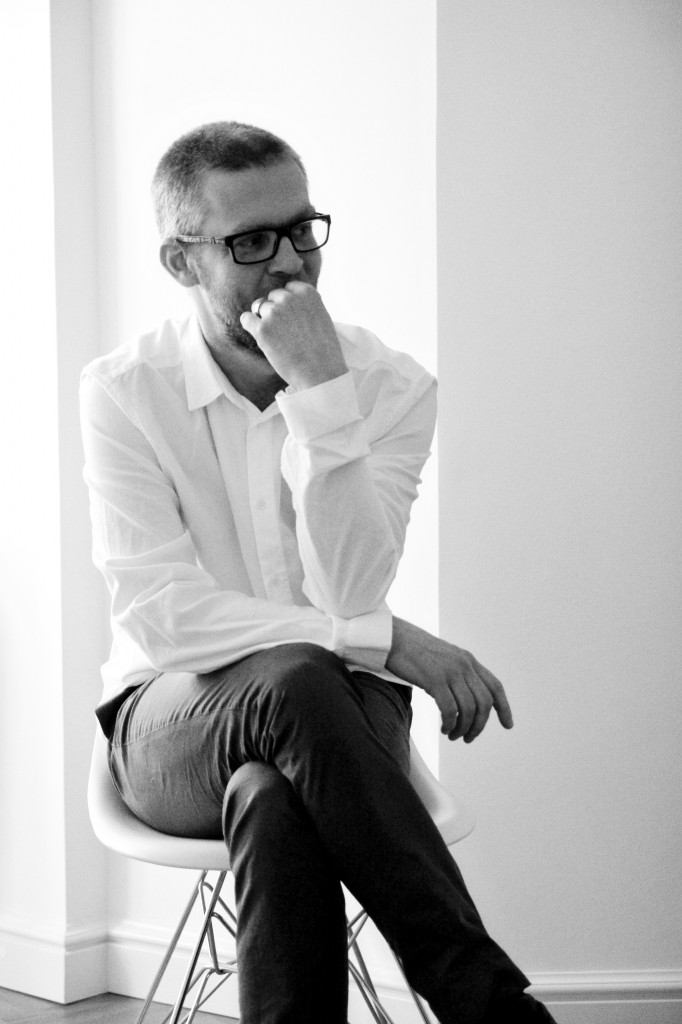 Magdalena Kröner: I would like to learn more about the experience building Estonia’s national pavilion. How does one plan and execute such a large production? What were the biggest challenges?

Dénes Farkas: Luckily, a production like this is never a solo enterprise but in this case an international group endeavor. I worked with Tallinn-based curator Maria Arusoo as the project’s commissioner, Washington-based Adam Budak curated the pavilion and the office of Berlin-based architect Markus Miessen designed and built the structures, – to name just a few of the many people involved with this. In the beginning I found it really difficult to work in such a historically laden space with all kinds of architectural and cultural references in it, so it was important to build a structure that would work against all these connotations.

Tell me about the concept of “Evident in Advance”.
I wanted to create a variety of rooms to be entered from the central room in the building, based on the concept of a library, an archive or a classroom. So the central room, adhering mostly to the traditional concept of what an “art exhibition” consists of, contains a library with around 10.000 books at the time, each with a different words from the novel inside printed on its spine. Each book contains sentences from Bruce Duffy’s 1987 novel “The World as I Found it”, a semi-fictional story based on a person’s life called Ludwig Wittgenstein who is not actually Ludwig Wittgenstein but something like his alter ego, alongside my own drawings and photos.
Initially, I wanted the visitors to take a book and wander the rooms guided by the words and images in it, but the people were mostly too afraid to even touch the books. In another room, I installed a registry of more than 30.000 index cards containing knowledge of the British Oxford Dictionary. Initially, the index cards were not meant for the visitors to take away, but obviously people felt tempted to take some with them, so the total number of cards would gradually diminish. Each card tries to explain the 10.000 words on the spines of the books in the big room and collect all the knowledge there exists around this word. I wanted to create a massive failure, illustrating the human desire to know and to explain everything, but what you get in the end is a completely self-referential situation. 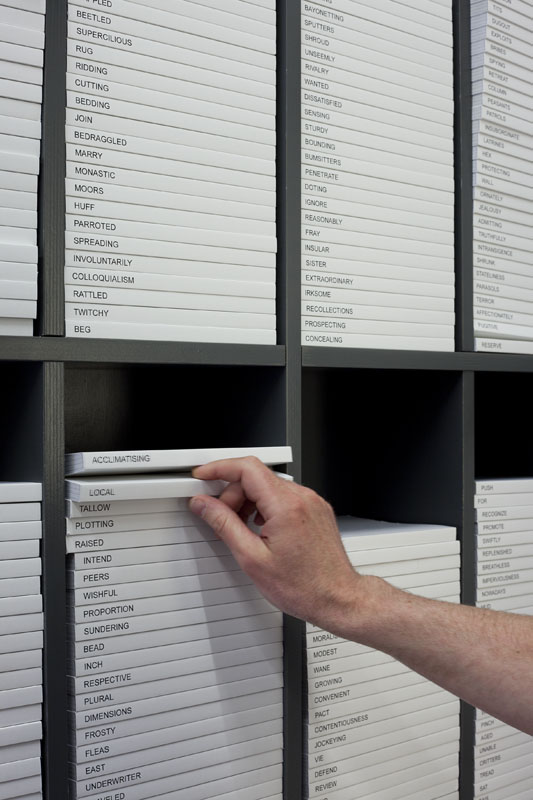 A lot of people reckoned the pavilion to be one of the most “hermetic” of the whole Biennial. I would like to learn more about the concept of “failure”. How did you create that tangible sense of failure and futility one experiences throughout the whole exhibit?

The whole exhibit tries to deconstruct Wittgenstein’s philosophy of language and create something new out of this. Basically every room deals with the notion of philosophy and its relation to human knowledge. I liked Wittgenstein’s idea of grasping the whole world through sentences, which of course is and absurd concept in itself. It is impossible to cover the whole world in sentences. Language and the world are two fundamentally different things, so they will always be separate. In one room I try to develop a play based on Bruce Duffy’s novel, but all I show is the props and sketches for a possible play and not the play itself. I wanted to work against the expectation to present something readily consumable for the viewer, but at the same time I do want to give them something; enable some kind of experience. But baiscally, it all harks back to failure and ilustrates various ways of failing.
Also, there is a room with an image of greenery, an in one there is a plant called „Baby’s tears“ or „Mind your own business“. It is a reference to Wittgenstein who was also a gardener. I liked the idea to have a plant in the middle of all this, because it does not fit the rest. Later, people told me that they liked the plant most, as it disrupts the whole installation and got them thinking.

Were you succesful in creating the perfect failure?
I guess I was. I hoped to create something nobody understands, not even me. (laughs) The books, texts, images, notes and index cards won’t create a congruent image. They won’t add up to one piece of knowledge, even if you try very hard. In the end you just witness everything referring to itself.

I like the idea to develop a body of work constantly hovering on the limits of language and cognition. In his „Tractatus“ Ludwig Wittgenstein talks about language as the ladder that you have to throw away after you have climbed up on it. Why did you choose Wittgenstein?
Bruce Duffy wrote his novel about this crazy man called Wittgenstein doing all kinds of outrageous things and I liked that from the beginning. I only started reading Ludwig Wittgenstein’s texts later and got involved in his thinking about language, understanding and logic. I am not a philosopher, so I guess my way of looking at his work is much more personal. I was always interested in the reasons why I do not understand something and I sincerely believe there is no such thing such as understanding per se. I guess Wittgenstein was absolutely right about the impossibility of understanding. I agree with him in the way that it is impossible that two people in a room will understand the same thing if they hear it or mean the same thing if they talk about it. I guess I always liked the dysfunctionality of Wittgenstein’s concept. I liked how he wanted to describe the world in all possible objectivity, but in the middle of these descriptions there are these bouts of total subjectivity undermining the whole concept. In its unique way of failing, the work makes total sense.

Tell me more about your penchant for failure…
I am an atheist and do not really believe in anything; but I make art anyway which is quite a contradiction if you will. I knew I would fail in my attempt to create this exhibit but I did it anyway because I was interested in the process. In the end, I did come to any conclusions, but while creating it, the whole work changed and that is what I appreciate about it. It felt really meditative. For one and a half year I was collecting material and the outcome was a whole lot different from what I expected. 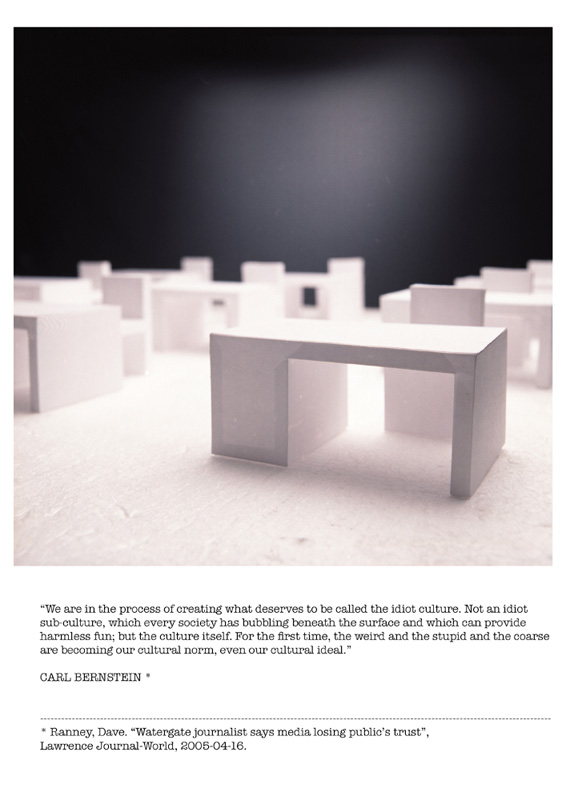 Tell me more about your earlier work…
I have a degree in photography and worked as a photographer and printmaker. Initially, I wanted to study architecture, but my grades weren’t good enough. My interest in architecture turned into building minitiature paper models that were also part of the Venice show. I build small paper models and photograph them or arrange them in lightboxes, as I did for the series „Superstructure“ in 2009. I was always very much interested in Joseph Kosuth’s work and his desire to really define things in the world: A table is a table. A chair is a chair. So I wanted to build these things in a way that their definition, their essence would shine through. I wanted to build them as simple as possible, but then I realized that they are not things but paper models representing things and that they have their own history and cannot solely function as objects.
In 2006 I build a series of miniature works out of white paper called „Green Diagonal“. One is a spatial situation I built along a quote I once read from Watergate Journalist Carl Bernstein: „We are in the process of creating what deserves to be called the idiot culture. Not an idiot sub-culture, which every society has bubbling beneath the surface and which can provide harmless fun; but the culture itself. For the first time, the weird and stupid and the coarse are becoming the cultural norm, even a cultural ideal.“

To illustrate the quote, I initially wanted to recreate the Washington Post’s newsroom, but it proved to be too much of a hassle so I just built a couple of desks and chairs as stand-ins for the newsroom.The last work of the series is called “White Cube”. It might evoke images of a horizon, but is really just the edge of a blank, white sheet on paper on the wall. 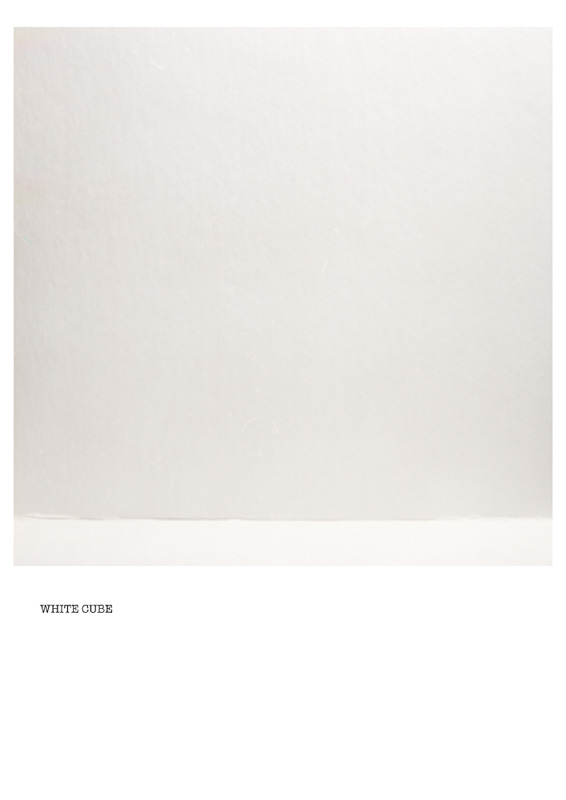 Some works confront seemingly intimate texts or quotes with rather generic furniture or rooms, like this one of a couch, called „Before the Taxi stopped“…
This actually is a very peculiar story, because two friends of mine would break up because of this work. My friend and I used to teach together and we would always hang out afterwards. He and his girlfriend used to watch a show called „Married with children“ on TV. Usually, at two or three in the morning his gilfriend who worked the nigtshift at the newspaper would pick us up in a taxi. One day they saw my work and realized „This is just like us: we sit on the couch every night and watch that show when we get home and there is nothing to really talk about anymore.“ So they broke up.

Ouch.
I guess l like to repeat the same things over and over again. Maybe I shoot for Beckett’s way of failure where you try something over and over and never succeed.