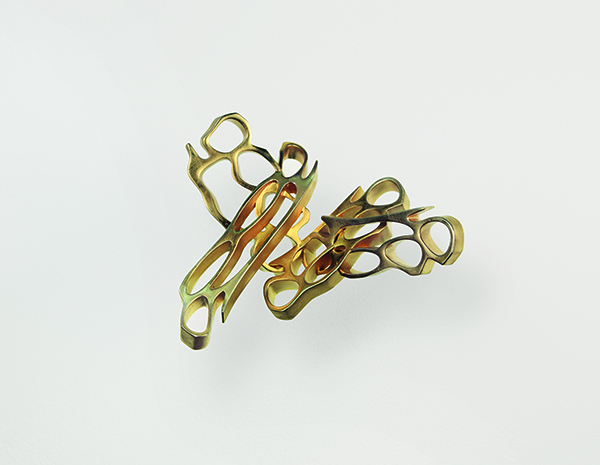 Soft Collapse: The World as Effect
On the work of Robert Lazzarini.
By Magdalena Kröner
Robert Lazzarini’s objects are invalids. They might have suffered some complex damage or better: a transformation whose origins remain obscure, with its traces remaining evident. What is presented to the viewer are recognizable tools, weapons, boxes of bullets; in short, remnants of everyday life which are easily identifiable. At the same time, the objects seem to be like three-dimensional shadows of their former existence, distorted and warped. They equally challenge the boundaries of materiality and perception, appearing intrinsically changed, but not merely deformed. The transitioning they’ve undergone is a fundamental one, achieved in a complex process of formal analysis, mathematical distortion and true-to-the-origin recreation.
Still, the knuckles, revolver, and safe are made of familiar materials which do not readily lend themselves to such deformation: steel, wood and brass. The objects seem to have suffered a massive physical trauma; or perhaps they are the results of a transubstantiation of thought, as though the effects of a hallucinogenic drug like LSD went beyond distorting the subjective appearance of things to the brain of the beholder to include the direct translation of their fantastic forms into reality. Things swell and contort as though they were inventions out of whole cloth, but they retain the original proportions. Lazzarini’s approach to sculpture suggests where his oeuvre can be located: it is as much informed by Baroque painting featuring daring first planar distortions as it is by Pop Art’s way of incorporating everyday objects and Minimalism’s factual interest in the relation of object and world.
The interest in the distortion of everyday objects has been palpable in art before – especially in the era of Pop Art. Think of Césars melting plastic, evoking endless varieties of biomorphic shapes in its artful decay; think of Claes Oldenburg’s giant soft shapes. But where Oldenburg’s process of blowing up and melting things was deeply rooted in theatricality and performance, in Lazzarini’s work a classic sculptor’s sensitivity prevails. Although his objects are founded on original materiality, they bring about a fundamental irritation of perception. His artifacts remain as legible as an Oldenburgian “Giant Soft Fan”, but they reach out into the uncanny, the uncomfortable and confront each viewer with the limitations of ones’ cognitive and perceptive abilities, rendering them questionable. The viewer’s perception insistently tries to unbend these changes and restore them to their familiar shapes; to set a confused and befuddled vision straight and adopt a suitable angle of view — but eventually it is impossible to avoid the realization that these efforts are in vain. What is happening instead is a soft and eerily smooth collapse of the real into incomprehensibility. The viewer “loses grip” on these objects and furthermore loses grip on reality itself. 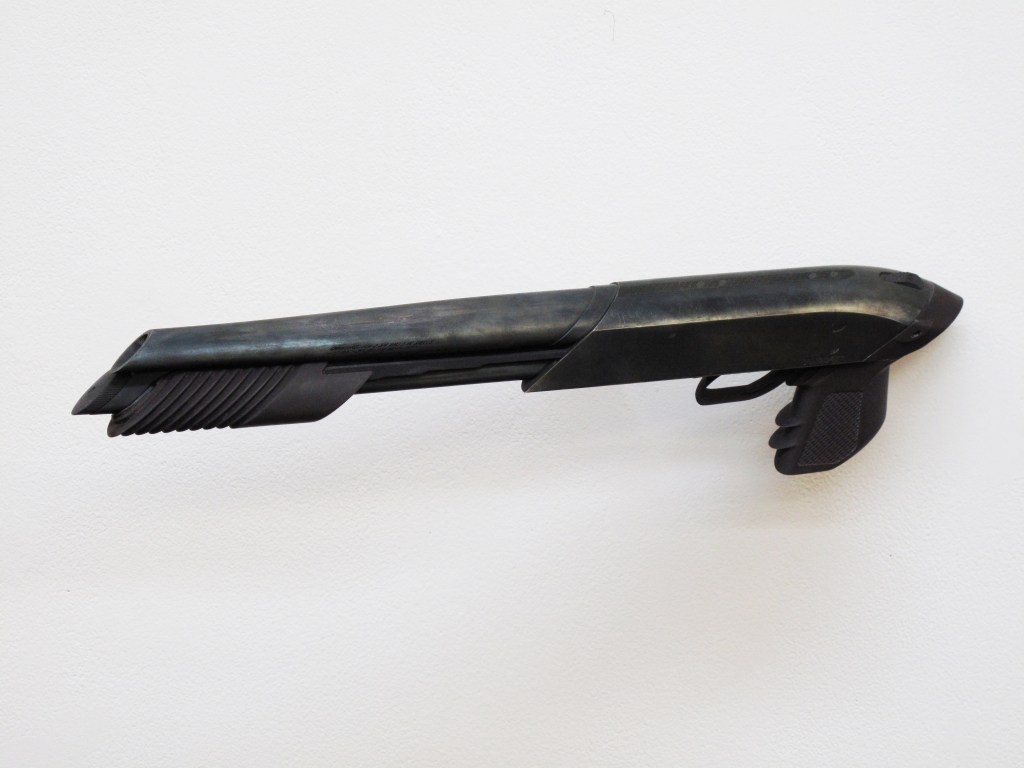 Hovering between instantaneous legibility and abstraction, between threat and beauty, Robert Lazzarini’s paradoxical objects, though originally made for direct contact with the human hand—a knife, a gun, knuckles—cannot be grasped, let alone used. Irremediably tilted out of our reality, they stake out their own semiotic field, becoming autonomous signifiers. They negate their function, their inherent practicality, and elude the attempt to frame them in unequivocal terms. Their altered physical form not only defies normative connotations and categories, it also opens up a wide field of novel interpretations, allowing us to consider the objects from angles that are resolutely at odds with the archetypal connotations they have in their original guises. These artifacts do not function as mere illustrations of social and societal critique. They are not built to simply make a brash political stance such as to criticize the abuse of guns in the U.S. Nevertheless, the myth of American violence is palpable in the undercurrents of these objects: in their frayed glamour, they hint at Hollywood’s exploitation of the archetypal American criminal celebrated in movies and pulp novels as well as capitalism’s fetishizing of the object.
Robert Lazzarini’s focus is on formal as well as conceptual questions: How far can I distort the shape of an object without rendering it unrecognizable? What semantical changes are brought about by the shift of perspective inscribed on the sculptural body? And which form of engagement on the part of the beholder does this manipulation demand?
The result may look hallucinatory, bordering on the psychedelic. It generates novel and hitherto unseen objects that initially seem to corroborate the physical representations of what they originally were: a gun, a knife, knuckles, a safe. Lazzarini’s objects at once reject traditional representational and semiotic connotations of any kind. Physically transformed, they only distantly recall concrete things they nonetheless seem to embody to a certain degree. The distortion proves to be not an optical illusion, but what the artist describes as a “structural change in geometry and proportion that affects the entire object”. What comes into being in this process are indeterminate objects; fundamentally ambivalent bodies that may be formally and culturally connected in eclectic and ambiguous ways, responding to the reality around while equally challenging its material boundaries. The materials they are made of are not only familiar; they are real: a skull is cast in real powdered bone, a gun is made of steel and the handle of a hammer is carved in wood.
Furthermore Lazzarini records possible traces of ordinary use imprinted in the objects and maps them to the surfaces of his sculptures. Their characteristic original shape remains discernible, but these objects have been stripped of the function for which they were initially devised. They no longer “fit” the human body the way they used to. 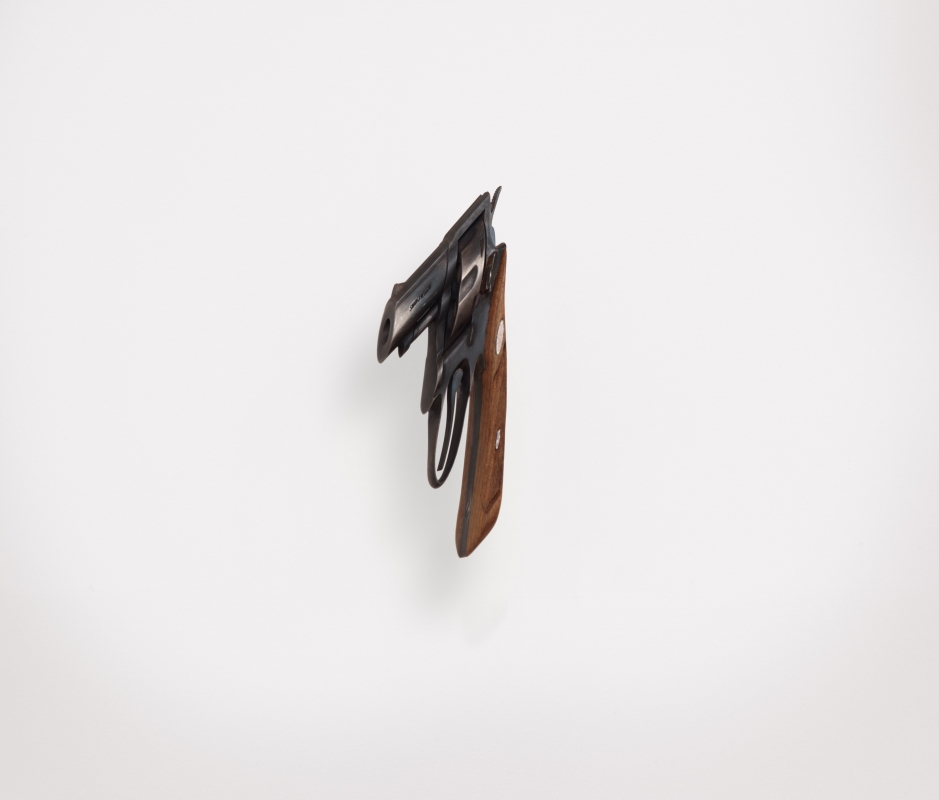 These contradictory objects are physically present in a distinctly abstract and ambiguous way. They reveal how spurious the solid objects man has conceived to represent abstract ideas really are, undermining not only the functionality originally intended for them but also refusing a viewer’s desire to correct the disfiguration. What appears to be, at first glance, the titular “Jam Shot,” a brute-force way of opening a safe with a nitroglycerin charge, is in reality a formal and structural deformation of surgical precision, affecting the nature of even the smallest detail of each artifact. It distorts the object just far enough, makes it just unfamiliar enough, thus challenging conventional categorizations, may it be “everyday object” or “sculpture”, “beautiful” or “ugly,” “aesthetic judgement” or “everyday life”. 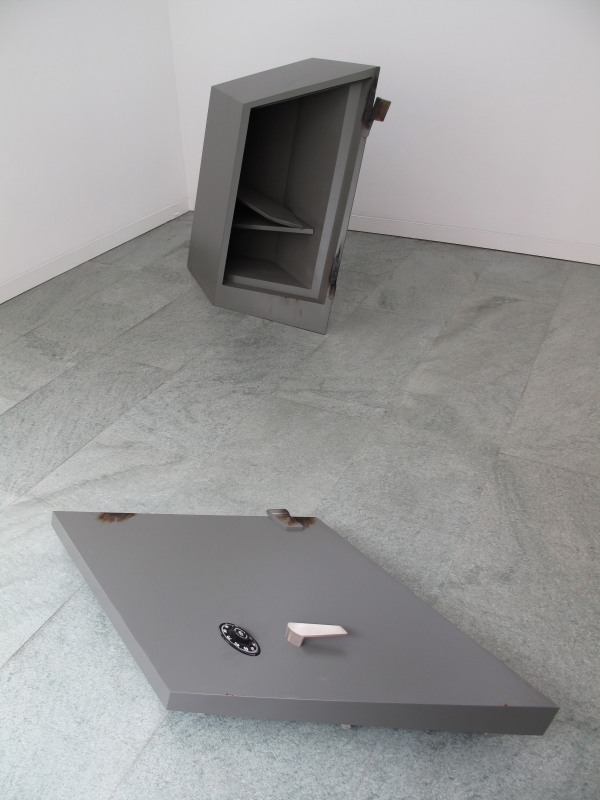 Robert Lazzarini’s formal operations mind the complexity and the limitations of every manmade artifact. By structurally disrupting their functionality, he transforms things into discursive objects. In that process, his sculptures open themselves up to be discussed as ideas rather than items; as embodiments of abstract concepts such as freedom, power or violence. The efficacy of the weapon, the snug fit of the knuckles and the unbreakability of the safe can no longer be depended on. The artistic reconfiguration of the object’s contextuality deeply affects its semantic structure: it allows each piece to transition from significant to signifier, from man-made artifact with a clearly defined purpose to utopian or apocalyptic tool previously unseen, spelling out a formal and contextual language previously unknown. The legibility of these objects may vary according to each viewer’s disposition. Robert Lazzarini’s sculptures have become objects in their own right, deftly occupying a realm of idiosyncrasy.